We asked the patrons who found our hidden artwork in the Pasadena libraries a few questions. Here’s what they have to say… 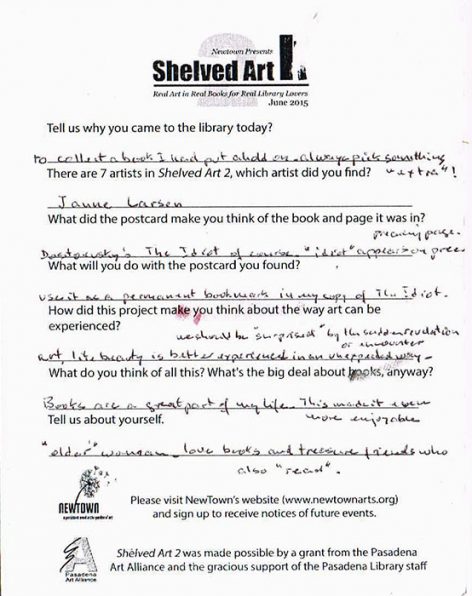 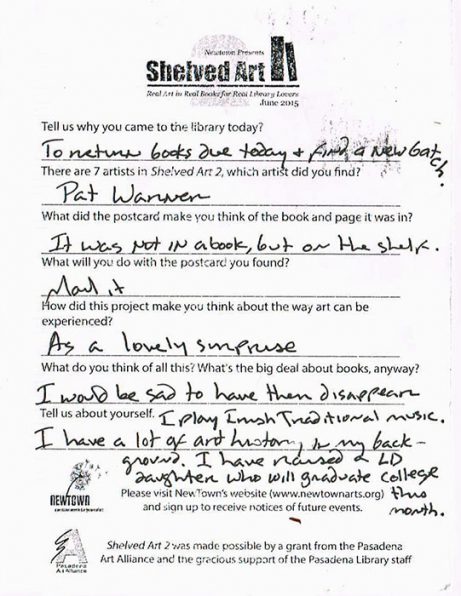 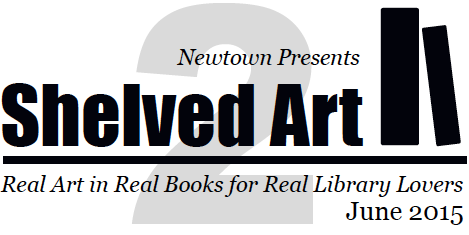 Shelved Art transforms a trip to any Pasadena Library into an adventure in the stacks. Seven Southern California artists have hidden their creations inside books: not simply visual art photographed to fit on a postcard, but works created expressly for the 4.25” x 5.5” format. The artists have each selected 150 books that relate to their work of art. But why insert in that title? Why that specific page? Crawl inside the artists’ brains to discover how they think, how they assign meaning to often abstract imagery, or let simple serendipity plunk an artwork into your hands. The cards are yours to take home to enjoy, or send them to friends before visiting our website where you can become an art critic, query the artists and participate in community-wide dialogue.

Shelved Art 2 is the second installment of Shelved Art, where postcard-sized art is hidden inside books of all ten Pasadena Public libraries. Shelved Art 2 continues the original project but widens the scope with 7 new artists, and the artwork will remain in the books until serendipitously discovered by library patrons, quite possibly many years after placement.

Shelved Art 2 continues NewTown’s mission of presenting artworks in unexpected contexts. The library becomes a democratic, expansive vehicle for transporting artwork. Postcards might be taken to homes, travel on buses, left on city benches and potentially travel even farther or sent on loan to another library.

NewTown is an artist-run laboratory for new and unusual presentational formats for today’s progressive visual, sonic, performing and media arts throughout Southern California. It strives to bring new audiences to today’s cutting-edge art. As a non-profit organization run by working artists, NewTown is committed to advancing regional alternative arts through advocacy for funding, access to venues and payment to artists. For 20 years, NewTown has presented OVER 675 artists in all disciplines, and brought artworks and new art forms to an estimated 400,000 people–many of the events free and in public spaces.

Barker first became active in artist-run projects at Florida State University, leading him to form a non-profit organization with Claudia Bucher. In 1988, Barker became one of the founding members of The Critical Art Ensemble with Steve and Hope Kurtz. In 1991, he moved to LA and in 1993 he formed BS International with Rachel C. Spencer, the collective has exhibited performative site-specific installations throughout Southern California. From 1995-1999, Barker was the technical director for Los Angeles Contemporary Exhibitions and from 1999-2009, he was the technical director for the Hammer Museum. 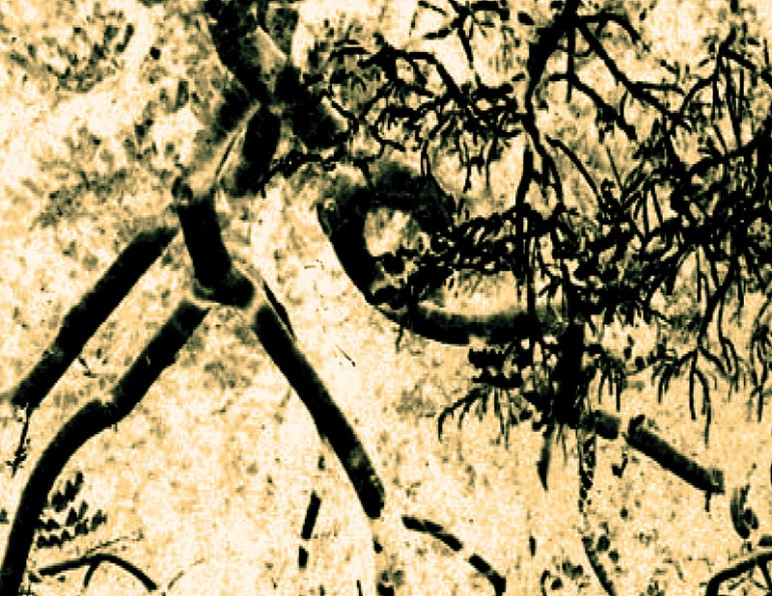 Janne is an artist and set designer living in Los Angeles. She has designed theater, opera, dance throughout Los Angeles and New York and has exhibited her artwork locally and internationally. Her work has been seen at Symphony Space, Pomona College, Cal State L.A, Caltech, CalPoly, Horsetrade Theater, Los Angles Municipal Gallery, Workspace, Weekend Gallery, Telic Art Exchange, and Outpost for Contemporary Art, The Municipal Gallery of Assisi, The Washington Museum of Art and Elephant Gallery. Insert Blanc Press will be publishing a book of Janne’s work in 2016. Janne is also part of the dining collective, Inner Dinner, a group of people who make dining experiences around art. www.Jannelarsen.com 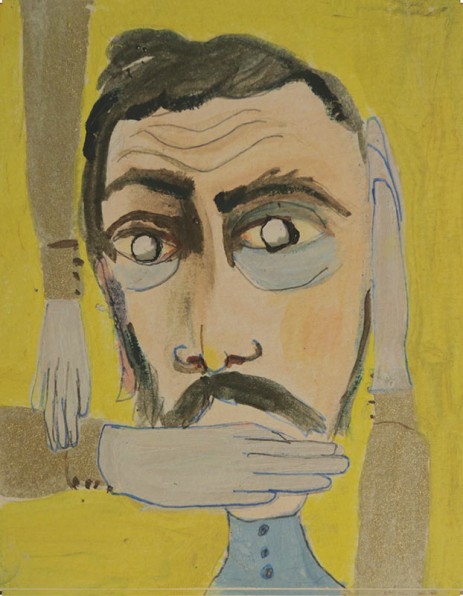 In 1998, five artists came together to create new works which salvaged, theorized, and represented our experiences of being mothers. Our aim is to give voice to the unarticulated experiences of being mothers and to send out subtle dissenting signals that have the possibility of spawning new models. We initially focused on breastfeeding as a practice and a metaphor for mothering. Now, as mothers of adolescents, our attention turns to a tumultuous time of simultaneously hanging on and letting go. Our artistic output includes video, performance, installation, writing, and photography.

When he moved to Los Angeles, he continued his artistic collaborations with the Sherwood Oaks Experimental Film School, co-founded ZTZU art group which operated an alternative art space in Los Angles, as well as ZTZU ‘Out Of Canada’, where he toured Canada with co-founder Mike Mollett doing installations & performances. He continued his travels with Nepal weavers to translate his work into rugs, as well as an atelier and exhibition in Germany. He co-founded L.A. Dada art group which still flourishes today and was co-organizer for the Dadafest L.A., a city-wide arts festival.

He has been involved in Mail Art/ Correspondence Art for twenty years, connecting with many artists around the world. nealtaylor.us 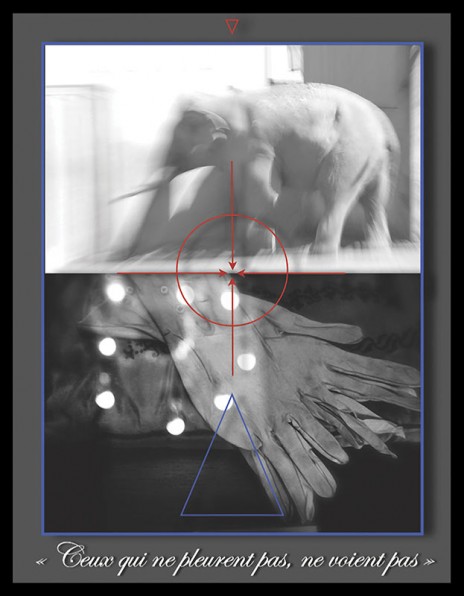 Julie Viens was born in Omaha, later moved to Colorado, and during high school moved to California with her sister and father. Residing in urban sprawl of Los Angeles, she lives with her husband and their dogs. Adept in several layout, retouching, and illustration programs, some of her clients have included: Guitar Center, EarthLink, Mattel, Toyota, Honda, and more.  Julie can be easily found working on art behind the computer, or the easel. Of late she has devoted much of her free time to working in a variety of styles including: oils, acrylics, water color pencils, and gouache. 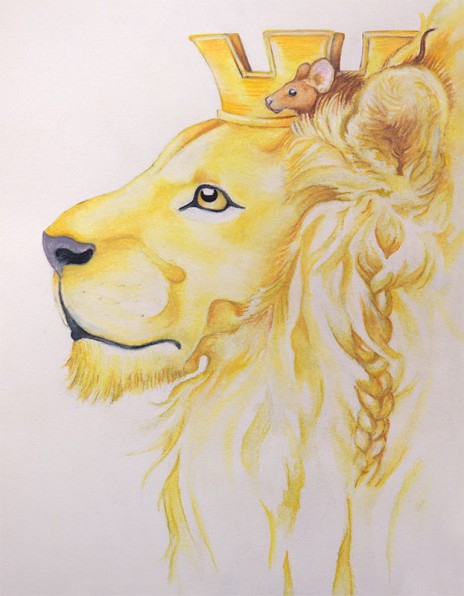 Pat Warner’s work has been exhibited in the L.A. Municipal Gallery, Barnsdall Art Park; the Robert V. Fullerton Museum at CalState San Bernardino; the Cleveland Museum of Art, Ohio; the Dallas Museum of Fine Art, TX; and the American Craft Museum, N.Y.  She has participated in exhibitions, residencies and symposia in the U.S., Japan, Korea, Lithuania, and The Netherlands.  Public art projects include a work for the Morton Arboretum, Lisle, Illinois, and the Pierce College Station on the LAMTA Orange Line.  She was the first River Resident at A Studio in the Woods/Tulane University, New Orleans, and a resident at the Ucross Foundation, Clearmont, Wyoming. www.PatWarnerPojects.com 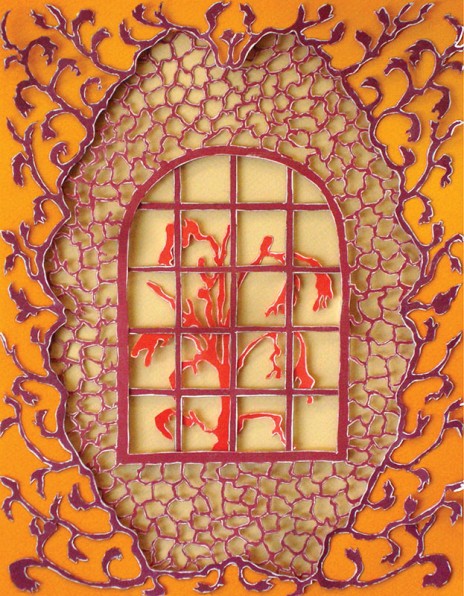 Jody Zellen is a Los Angeles based artist who employs media-generated representations as raw material for aesthetic and social investigations. She works in many media simultaneously making interactive installations, mobile apps, net art, animations, drawings, paintings, photographs, public art, and artists’ books. Her primary focus is the exploration of the intersection of art and technology. Most recently she has been making mobile apps as artworks. Her apps: ” rban Rhythms,” ” pine Sonnet,” “Art Swipe,” “4 Square,” “Episodic,” and “Time Jitters” are available in the iTunes Store. For more information visit www.jodyzellen.com. 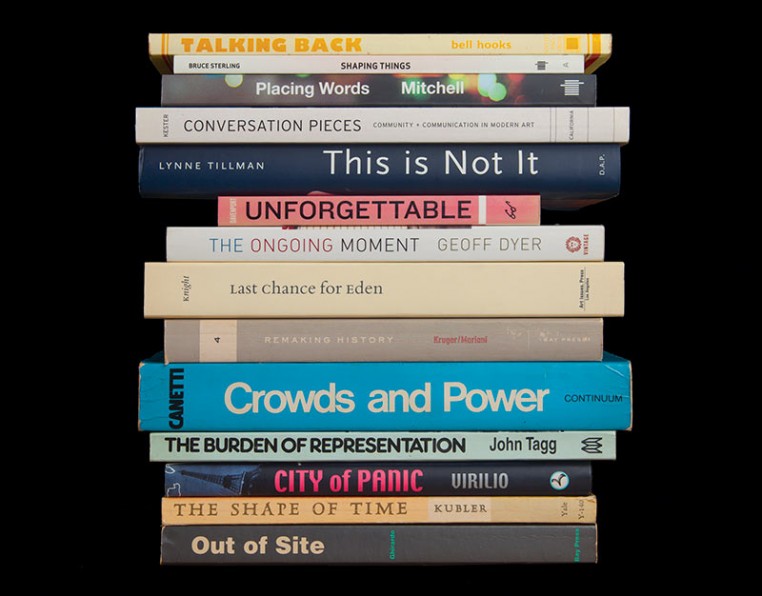